Need to see a brain-compatible classroom in action?

Stroll the halls of Clyde Erwin Elementary Magnet School in Jacksonville, NC, and when you hit the fourth/fifth grade hall, enter the first classroom on your right.

A huge, blue vinyl wall decal of a brain immediately sparks thought.  The brain and its tentacles consume two-thirds of the dry erase space. The brain itself appears to be acting as any brain would–as center point, command center,  the ultimate container, information central.  Upon first inspection,  it’s not mind-boggling to find the brain used  to help students collect and organize thoughts. 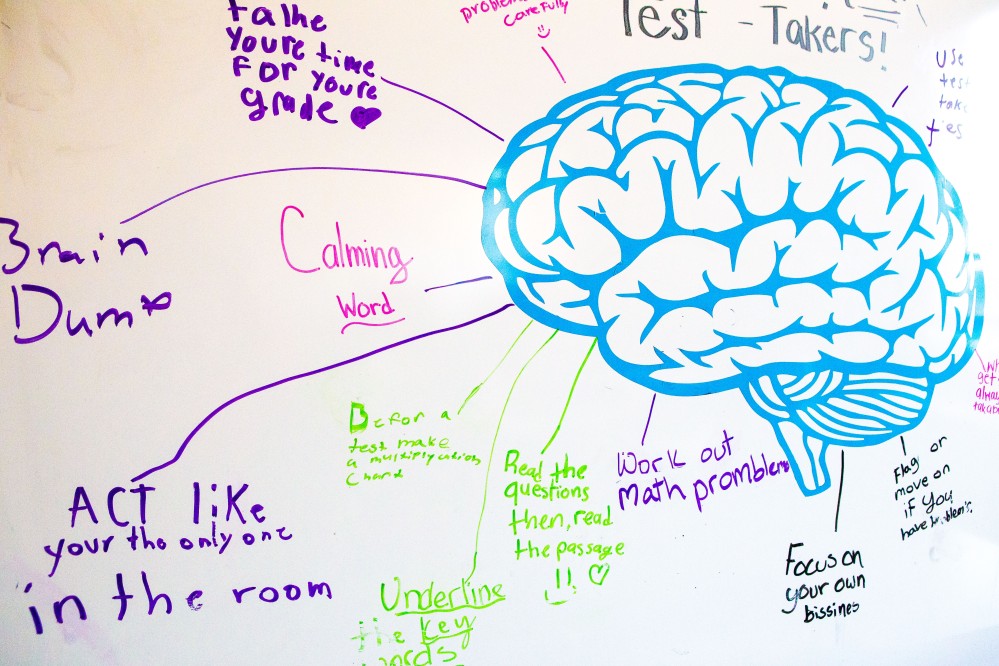 Socrates philosophized about the essence of metacognition with the enduring aphorism: “Know thyself.”

And Shakespeare, albeit a bit more poetically, also advocated for metacognitive thought: “This above all, to thine own self be true…”

Self-knowledge is entry to endless possibilities; for when you know yourself, you can create methods, strategies, techniques, mnemonics, sensory cues, mental models, and intellectual filing systems that help you thrive as you live and learn in an increasingly complex world.

Emotional Intelligence:  (noun) the capacity to be aware of, control, and express one’s emotions, and to handle interpersonal relationships judiciously and empathetically. dictionary.com 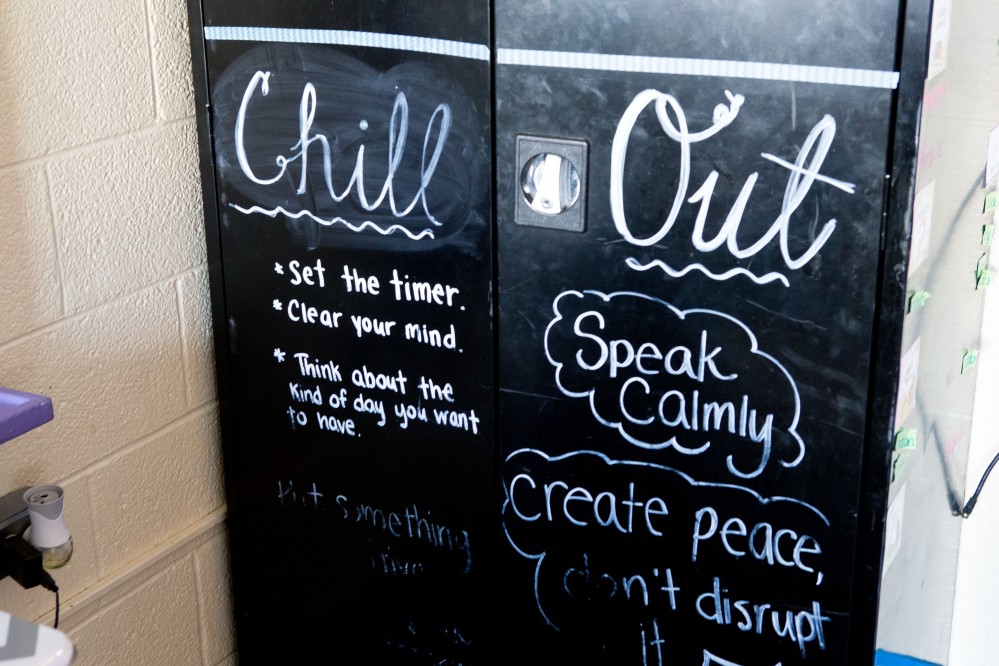 Christian explains student demonstrations of self-regulating behaviors signal their readiness to explore more academically sophisticated brain functions.  The brain—the blue vinyl one—-functions as a placeholder, capturing the fountain of thought flowing from students’ brains–the gray-mattered ones.  Students brainstorm solution-driven ideas not just for mathematics but for problem-solving in general. Creating self-reliance, students tackle contextual concepts such as What do I know? What do I to when I am stuck.?

“In science,” Christian says, “when we study the  human body, we put  a lot emphasize on how the different bodily systems interact with each other, so we used the brain as the actual brain in the body, mapping how it connects with and controls the rest of the [body’s] systems.”

Christian says that the blue vinyl brain’s current content (Strategies of Great Test-Takers) has been on display for a while and reflects the continued need to ease students’ test anxiety.   The teacher indicates that it is important to keep the strategies that work best for students front and center.  The revelation that each student needs to basically “keep their eyes on their own paper” is an ongoing and necessary reminder as students actively fight to regulate behaviors associated with test anxiety. 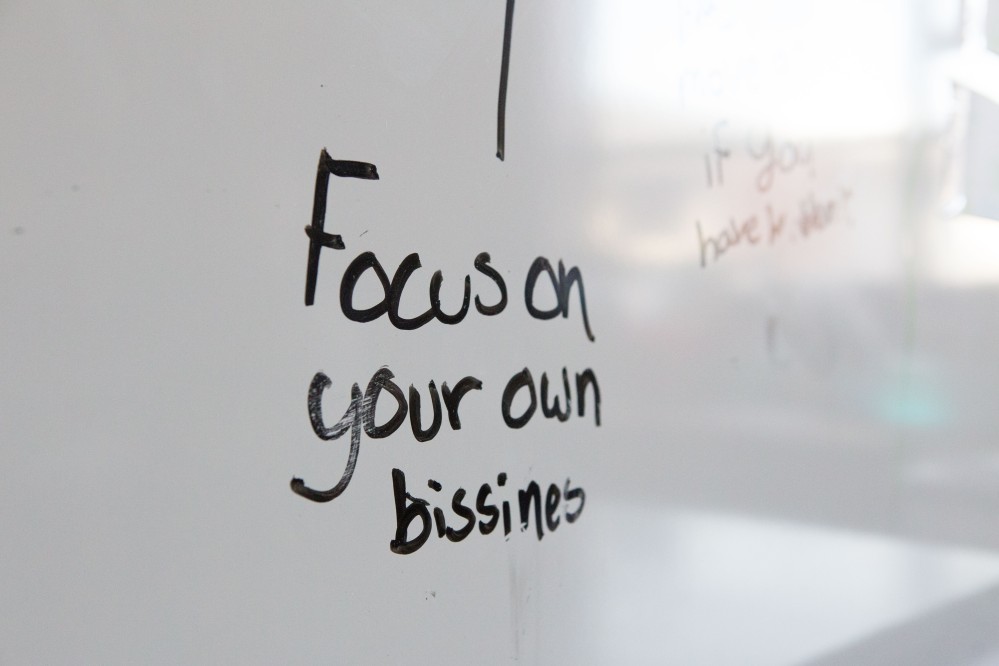 “Focusing on your own bissines” is an important student-identified strategy, Christian confirms:

“We still have a major issue with that. Like, we’re still looking around to see who is doing what. ‘Are they finished before me?’ And then, there’s automatic anxiety–like rushing.  And it’s not even just testing. It’s in everything. It’s happening to everybody, but what can you specifically focus on to fix it? If you understand that you can control it (anxiety) or you understand where it’s coming from, then you understand you are in control of it. It is not something that is happening to you. You can figure out your triggers. You can control it.”

Christian asserts that a lot of kids are taught not to pay attention to their emotions unless it’s anger: “For example, we are not going to be sad. We are going to be angry because boys don’t cry.” She credits time spent helping students understand and, thus, regulate their emotional responses as de-escalating potentially dangerous behaviors–particularly, in a former student with violent tendencies. The student learned to regulate his own behavior, using other other problem-solving strategies in lieu of physical fighting.  Through this kind of strategic student-generated metacognitive knowledge, the student himself propels his own trajectory for success and is able to replicate these strategies in and out of school.  When students know who they are and what works for them, they develop a sense of self-efficacy that empowers them to succeed in specific situations, to tackle difficult tasks, and to persist to achieve goals in the spite of unforeseen challenges. 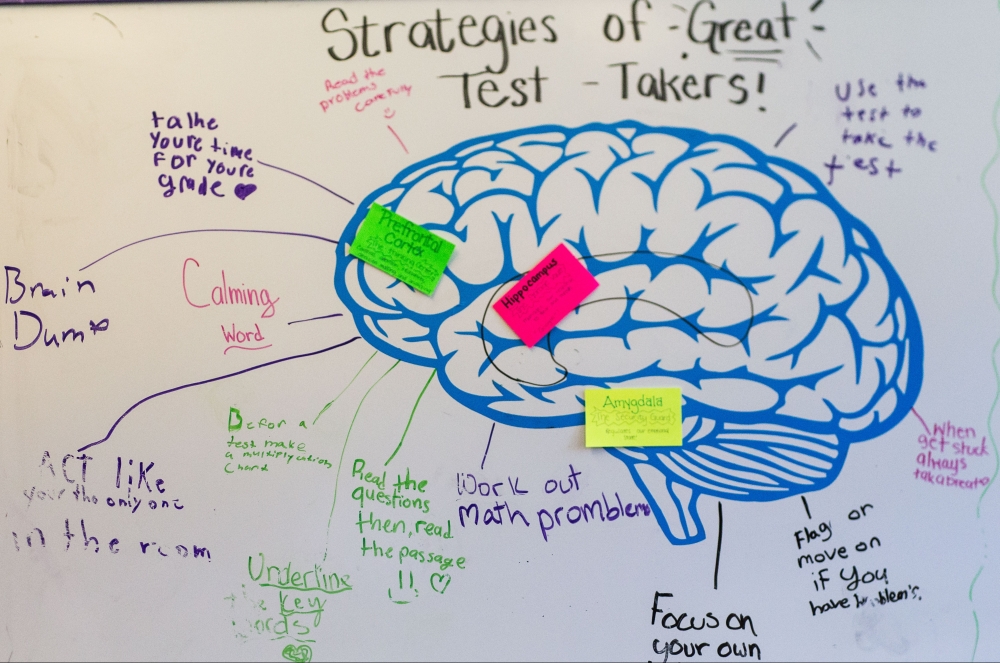 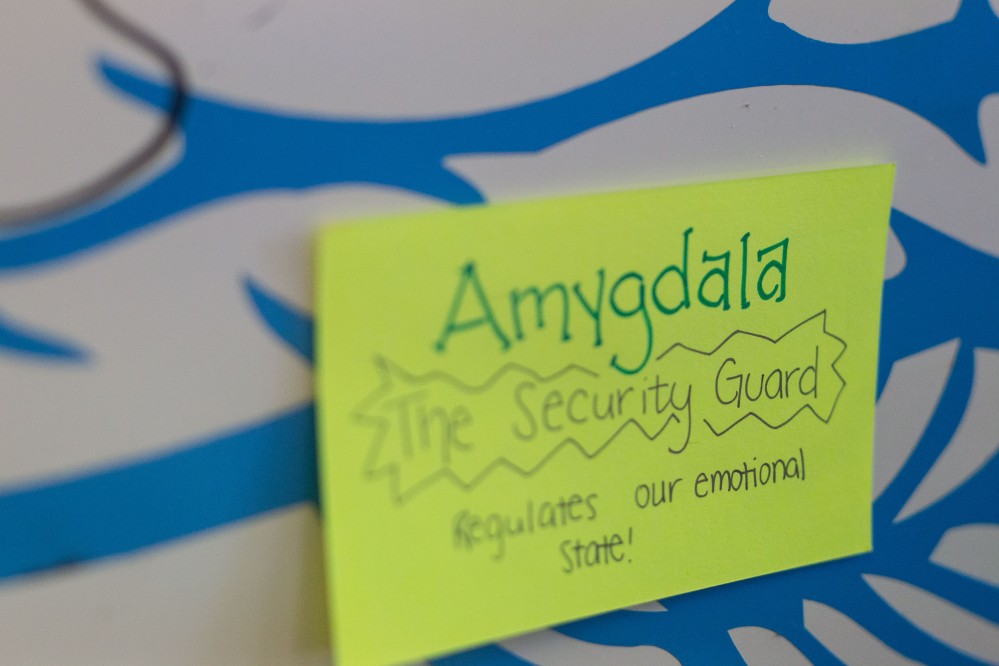 With its prefrontal cortex, hippocampus, and amygdala labeled, the brain becomes a visual aid  exhibiting its own functions. Illustrating to students what part of their brain is currently working helps them become increasingly more strategic when crafting responses to the stresses of living, learning, and testing.

Reflective of the social cognitive theorist and awarding-winning psychologist Albert Bandura, Kelsey Christian is a brainiac, offering students ongoing, year-long opportunities to begin their individual journey toward self-discovery,  self-regulation, and self-efficacy–by first minding their own business. 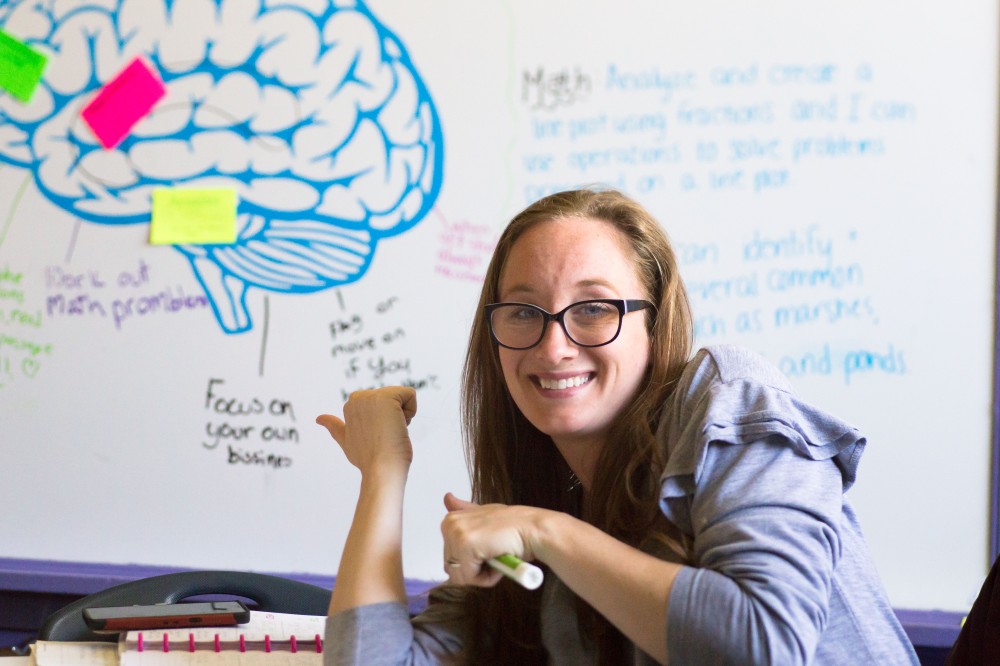 You have brains in your head. You have feet in your shoes.

You can steer yourself any direction you choose.

You’re on your own. And you know what you know.

And YOU are the one who’ll decide where you go…